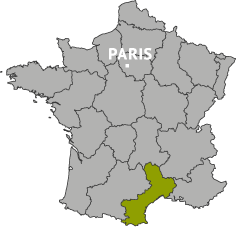 Enjoy easy riding along the Canal du Midi for the star-studded section from medieval Carcassonne to Narbonne vineyard and Mediterranean Sea.

After your bike fitting this morning, you have a relaxing, easy ride , as the route leaves Carcassonne and follows the roads and bike paths along the Canal (flat!). Your route takes you through a mix of villages with odd names, stemming from the regional language, which for centuries was not French, but the local "Occitan": Marseillette, Puichéric (with its 13th century church and annual pig festival) and La Redorte. You pass a first feat of canal engineering as well, the bridge of Orbiel, passing the canal right over the Orbiel River! At the end of the day leave the canal bike path to ride through the tiny roads and villages of the picturesque Corbieres vineyards – perhaps stop for a wine tasting, as your ride is almost finished... Your goal is a small village in the heart of vineyard territory, built around the region’s traditional curved central street, which are a vestige of the protective ramparts during a more tumultuous era. (*please note the CLASSIC itinerary stays in nearby Conilhac-Corbieres)

Decisions, decisions… two possible rides await today, quite different, and both great.  The Abbey of Fontefroide, is in the heart of the Fontfroide Massif made up of 4000 hectares of unspoiled nature. Bathed by the chilly Fontfroide stream (Fontfroide means literally cold spring), this sumptuous 12th and 13th century Cistercian complex and its winery are nestled in the heart of a beautiful and typically Mediterranean landscape. The slightly rolling ride there and back is one option. Alternately, head south along the canal de la Robine bike path towards the fantastic sandy beaches of Le Gruissan. Flat marshes, grasses, and birds are your scenery as you approach the Mediterranean. You’ll get views of the Barberousse Tower as you approach the seaside town. We recommend a visit to the Sea salt factory with its great local seafood restaurant, or simply head to the beach and enjoy the lively scenery (and perhaps some windsurfers) there!