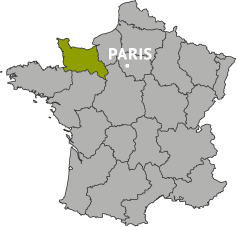 Come explore the Impressionist painters' favourite region, the cider houses, the Bayeux tapestry, the beaches, and of course the moving D-Day sites...

Day 1 of your Normandy Biking Tour : Arrival in Honfleur

Upon your arrival at the Deauville-Trouville train station, we’ll pick you up to transfer you directly to your first hotel in Honfleur. Honfleur is known for its old, beautiful picturesque port, characterized by houses with slate-covered frontages, painted many times by artists, including Claude Monet, as part of the Honfleur School, which contributed to the appearance of the Impressionist movement. The Sainte-Catherine church, which has a bell tower separate from the principal building, is the largest church made out of wood in France.…. Our Trip Manager will spend a little bit of time with you to go over your trip package and check the bike fitting, and then leave you to your explorations. Dinner is included this evening.

Your first ride takes you inland, into typical Norman countryside, with rich green terrain, apple orchards, and pretty villages with half-timbered houses. You are headed to Pont l’Eveque, a small town crisscrossed by no less than three rivers, resulting in many bridges. The town features heavily in the book “13 - Lucky For Some” about the history of the 13th (Lancashire) Parachute Battalion, and has also given its name to a delicious, locally made of cow’s cheese. While there, you’ll certainly be able to find some lunch, perhaps in one of the region’s famous creperies. And perhaps take the time to go on a tour of the Père Magloire Calvados factory, and do a tasting to give you the boost for the return ride to Honfleur for a second evening.

Day 3 of your Normandy Biking Tour : To Cabourg via Deauville-Trouville 40 km / 25 Miles

Say goodbye to Honfleur this morning. Your ride takes you along the coast, passing great examples of Anglo-Norman architecture, as you ride into the twin seaside resort towns of Trouville and Deauville. Trouville duals as a working fishing port, while Deauville is France's northern version of Cannes, attracting celebrities, the well-to-do, and even a popular American film festival. Continue further, parallel to the coast, and into Cabourg at the end of the ride. This lovely seaside resort was essentially “invented” by a Paris financier in the 1800s, when he converted a small fishing village into today’s picturesque seaside holiday destination. Another delicious dinner awaits you this evening.

Your ride today brings you away from the coast following the Canal of Caen, to Benouville and Pegasus Bridge, (originally the Benouville Bridge). There you can visit the Pegasus Memorial and Museum, dedicated to the first liberators who arrived in Normandy on the night of 5th/6th June 1944. Decide if you want to do the option to Ouistreham where you can visit the Atlantic Wall Museum, inside the “Big Bunker”, a former German headquarters. The Belvedere has an interesting orientation table and in front of the casino you can visit the Landing museum. The route brings you into the centre of Caen for the night, home of the WWII Peace Memorial, which we highly recommend.

Day 5 of your Normandy Biking Tour : Caen to Bayeux via Arromanches 53 km / 33 Miles

Today’s ride heads towards the coastline again, bringing you to Arromanches and Gold Beach, where you can visit an unusual circular theatre with a D-Day film shown on nine screens. In the D-Day Landing Museum learn about the construction and operation of the artificial harbours assembled in the days following D-Day. Your goal today is Bayeux, a beautiful medieval town with many sites, including the not-to-be-missed Bayeux Tapestry. This 70 metre long tapestry, a real historic document recounting events leading up to the Battle of Hastings in the 11thcentury, is unique in the world. You can also enjoy the recently re-opened Battle of Normandy Museum and General de Gaulle Memorial. Another dinner awaits you this evening, at one of our favourite restaurants.

A final loop ride today, taking you from Bayeux to discover some of the most famous WWII sites in the area. Head westwards parallel to the coast bringing you by the end of the morning to Omaha Beach and Colleville-sur-Mer. In Colleville take some time to visit the incredibly moving US Military Memorial with the cemetery, the chapel and then a little further on a memorial dedicated to the youth of America. There is also a viewpoint which overlooks Omaha Beach, which you will have pedaled to just before. Afterwards, a luscious ride along quiet countryside roads, dotted with villages, including Trevieres with its wide open square (and where you can find lunch). Upon your return to Bayeux, enjoy your final evening, and raise a glass as a celebration to your week of explorations.

Day 7 of your Normandy Biking Tour : Departure from Normandy

After a final breakfast, you can get connections out of Bayeux train station to return to Paris or for further travels. Bon Voyage!