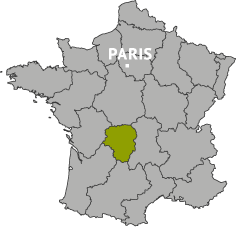 Fantastic cycling and sites in the rich history of the Dordogne Valley awaits you!

Day 1 of Your Dordogne Cycling Tour: Arrival in Rocamadour

Welcome to the Dordogne! We will meet you at the Souillac train station and transfer to your first hotel on the outskirts of Rocamadour, where we will provide you with your trip package and check the bike fitting, before leaving you with time for explorations. In 1166, an incorruptible body was found buried where the Sanctuary of Rocamadour now lays. This discovery propelled the village to become one of the 4 most important pilgrimage sites of medieval Christiandom, attracting Kings and paupers alike. The 216 steps that make up the Great Staircase separate the lower town from the complex of religious structures set halfway up the cliff, including the 8 chapels of the Sanctuary. Explore the ancient streets snaking one above the other in this vertiginous site, before your first dinner, included this evening.

Your first ride takes you through the gorgeous countryside of the Regional Park of the Causses de Quercy with rolling hills and valleys and beautiful villages - in fact, three of the villages you'll see today are amongst 21 of the Dordogne Valley's other officially classed 'Most Beautiful Villages of France'. But before that, the route brings you to the Gouffre de Padirac, one of the most incredible geological sites in all of France; descend into the caverns and visit the underground lake in small boats, with the stalactites and stalagmites reflected in the limpid waters around you. Then continue to medieval Carennac, sitting on the banks of the Dordogne River, and with a beautiful monastery, and fantastic view form the Dean's Castle. Climb away from the river, first to Autoire (nicknamed "Petit Versaille", and where you could decide to do the small hike to see the beautiful nearby waterfall), and then on again to Loubressac, with its spectacular views into the valley and golden-stone castle. Loubressace was also the site of the largest parachuting movement of WWII, when 500 ocntainers were dropped there to supply the very active local Resistance. Back then to Rocamadour for a second evening in time to enjoy a drink in one of the local cafés while deciding where you might like to eat dinner this evening.

Today’s ride takes you northwards towards the Dordogne River, passing through the lovely village of Mayrinhac, and crossing the river at St Sozy. Continue on a lovely route niched between the banks of the river and the shade of the cliffs through pretty Creyyse; and then up to beautiful medieval Martel, with its seven historic towers. Quiet countryside and villages bring you to Souillac, on the banks of the river. Take some time to meander through town and admire the 11th century Saint Mary’s Abbey - Souillac itself dates back to the foundation of a Benedictine Monastery in the year 655! After Souillac, you have the option for a climb away from the river to go to the impressive and beautiful Chateau of Fenelon. As with so many of the region's castles, the site was attacked, damaged, and rebuilt a multitude of times over the centuries. You finish your day following an easy-going bike path through lush greenery all the way into the medieval town of Sarlat. This incredible UNESCO heritage site, the largest Medieval ensemble in Europe, is best explored in the evening, when the beautiful "lauze" stone roofs and tiny cobblestoned streets are lit up beautifully by the municipality. One of your two dinners in Sarlat is included.

The loop ride for the day is one of the most picturesque, passing through several more of the "prettiest villages of France". Early in the ride start with La Roque Gageac, built flat against the cliffside overlooking the Dordogne, and with original troglodyte dwellings. Today you enter the heart of the Hundred Years' War, and you'll see medieval castles lining the river that warred across from each other... Take a short detour to Beynac, with its imposing castle built by the Barons of Beynac. Cross the river, and decide if you'd like to visit the castle Les Milandes, the castle of Josephine Baker, with its grand gardens and falconry. Climb up to the war museum at Chateau Castelnaud. And then, up a final hill to Domme, a spectacular example of the "Bastide villages" (fortified villages) of Medieval France. It was built in the 13th century by Philip the Bold and there are still examples of medieval graffiti by the templar knights, and a spectacular panorama to the valley below! Return to Sarlat for a second night.

Your route today takes you northwards from Sarlat through the Dordogne's rich countryside, where truffles and cep mushrooms, walnut orchards (you pass an ancient walnut mill), and grapes grow, and where you shouldn't be surprised to see goose and duck farms, for the famous foie gras in the truly picturesque villages. There is an option to detour to the incredibly beautiful Eyrignac gardens. Your final stretch of th day follows the banks of the serpentine Vezere River, through yet another "Prettiest Village", St Leon sur Vezere which is nestled in one of the "cingles" (meanders) of the river, and the lovely Castle of Losse, before arriving in Montignac. A pretty town in its own, Montignac's renown today is made as is the home of the massive prehistoric cave painting site of Lascaux.You'll be able to visit the recently opened Lascaux IV reproduction, just on the outskirts of Montignac, before deciding your final dinner, included tonight.

After a final breakfast, say goodbye to Dordogne until next time. We transfer you to Brive-la-Gaillarde or Souillac train station for your further travels. Bon Voyage!