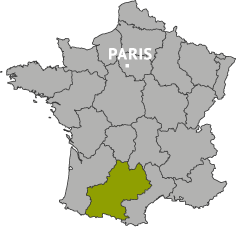 TOULOUSE TO SETE - ALL THE WAY

Upon your arrival in Toulouse, settle in to your hotel and freshen up, and then take some time to explore this lovely city. The capital of both the French department, and the larger Midi-Pyrenees Region, Toulouse is also the heart of Europe’s aerospace industry, home of both France’s Airbus Company and also a great attraction park, the Cité de l’Espace. Its world renowned university is one of the oldest in Europe (founded in 1229), and it was already the capital of the Visigoth Kingdom in the 5th century! A city with unique architecture made of pinkish terracotta bricks, earning it the nickname la Ville Rose ("the Pink City"), Toulouse counts two UNESCO World Heritage sites, the Canal Du Midi, and the Basilica of St. Sernin, on the Santiago de Compostela pilgrimage route. Dinner included tonight.

You have a long, but easygoing ride today, as it is very flat, and almost completely on lovely, paved bike path. Pass your first locks and canal projects on route to the small town of Castelnaudary, built on the foundations of the original Roman town. It is hard to imagine the centuries of warfare incurred here, as you wander the lovely small streets, eventually loved by Catherine de Medicis, when, as King Henri II’s wife, she becomes Countess of the region. The port here is developed as one of the main stops for barges on the Canal du Midi’s route, with a large (7 hectare) water basin. Castenaudary is also the capital of one of the region’s great specialties, the rich stew of beans, duck, and pork called cassoulet!

Continue parallel to the Canal du Midi, sometimes on the tow path, often on tiny roads through small villages, all the way to Carcassonne. It is hard to believe that this town is real, when you first approach it from afar. The ancient city, or Cité, (a settlement here from as far back as 3500 BC), sits majestically high, and is ringed completely by its castle-like ramparts. The city and its fortifications were rated a UNESCO World Heritage site in 1997. You'll soak up the view from your hotel, located right by the medieval walls, before wandering in to explore the cobblestoned streets and ramparts, or to sit in a café and watch the world go by before your dinner.

You have a relaxing, easy ride today, as it leaves Carcassonne and follows the roads and bike paths along the Canal (flat!). Your route takes you through a mix of villages with odd names, stemming from the regional language, which for centuries was not French, but the local "Occitan": Marseillette, Puichéric (with its 13th century church and annual pig festival) and La Redorte. You pass another feat of canal engineering as well, the bridge of Orbiel, taking the canal over the Orbiel River! You also enter the wine region of the Canal du Midi today as you leave the canal to head into the picturesque vineyards – perhaps stop for a wine tasting, near the end of the day, as your ride is almost finished... Your beautiful hotel, the Chateau Siran is in a tiny village in the heart of the vineyards. (*please note the CLASSIC itinerary stays in nearby Conilhac-Corbieres)

You may wake up, finish a flaky buttery croissant, and decide to hang out in Narbonne itself today. There is lots to see, and we provide a small self-guided walking tour to help in your explorations. But there are two riding options as well today: one, very easy-going and slightly shorter, eats up those final 10 miles to the sea on a great bike path, bringing you to the fantastic sandy beaches of Le Gruissan  – a refreshing contrast with these beaches and those of the Côte d’Azur is the lack of commercialisation: there’s no paying to get on the beach, no shelling out again for parasols and sunbeds. Just lovely golden sand and the lapping waves of the Mediterranean, as well as an option to visit a salt bed farm. Alternately, a slightly more rolling ride brings you to the 1000-year old Fontefroide Abbey, where you can visit the spectacular buildings and gardens, and taste some of their wines.

You ride right to the end of the Canal de Midi today, saying good-bye to it, as it empties in to the sea at Agde, originally a Greek port town. Stop to admire the beautiful Renaissance buildings of this town, as wel as the Saint Stephen's cathedral. Along the way, cross over the ingenious Libron locks system over the canal, and ride through the town of Vias, with its market square and Saint John the Baptist church, made entirely from the pretty, regional stone. From there, enjoy the luxury of the beautiful bike path that follows the sandy Mediterranean beach for 12 kilometres before arriving in the lively port town of Sete itself. Be sure to pack your bathing suit today as you will want to jump into the waves!

After breakfast, your Canal du Midi Bike tour has come to an end. You can take some time to explore Sete if you like this morning (the hotel can hold your bags for you) before getting connections out of Sete train station for your further travels. Bon Voyage!