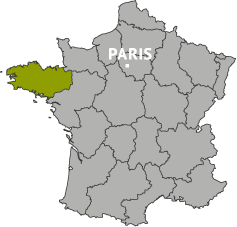 Say goodbye to Dinan this morning, and head towards the renowned and beautiful Emerald Coast of Brittany. The route brings you back towards the Rance River at its mouth, to Dinard. Dinard was first settled by Saint-Malo's shipping merchants who built some of the town's magnificent houses, a few of which survive. In the late 19th century American and British aristocrats made Dinard popular as a fashionable summer resort, and they built stunning villas on the cliff tops and exclusive hotels on the seafront during the French "Belle Époque". After explorations there, take the local taxi-boat across the mouth of the Rance River to the walled port city of St Malo, renowned for its pirate history, and your destination for the night. Another delicious dinner awaits you this evening. (please note the DELUXE chateau-hotel is just outside of St. Malo)

Your longest ride (though very flat terrain) is parallel to the coast for much of the day, bringing you at the end to spectacular Mont St Michel. This island-village has since the eighth century AD been the seat of the monastery from which it draws its name. Its unique position (an island only 600 metres from land) made it readily accessible at low tide to the many pilgrims to its abbey. This position made it readily defensible as an incoming tide stranded, or drowned, would-be assailants. By capitalizing on this natural defense, the Mont remained unconquered during the Hundred Years' War. The reverse benefits of this characteristic were not lost on Louis XI, who turned the Mont into a prison. Today, Mont St Michel and its bay are one of France's most recognizable landmarks, and are part of the UNESCO list of World Heritage Sites.

After a final breakfast, we transfer you to the train station of nearby Pontorson for your further travels. We can transfer you a little later in the day if you like (your hotel can hold onto your bags for you after check out, to take some time to explore the Mont St. Michel. Then say goodbye to Brittany, with its medieval towns, Emerald Coast, and the incredible Mont!