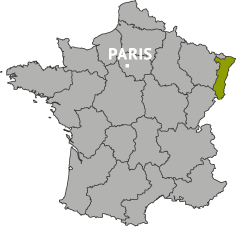 You'll love the many pretty villages, lined up one after the other through the vineyards, and get to cross the border to Germany on this easy bike tour!

Strasbourg, seat of the new European Parliament, is an ancient and lively city, filled with treasures to explore. It was named a World Heritage site by UNESCO in 1988, the first city to be honoured with the title in its entirety. This tour allows you time to meander the canals, cobblestoned streets, and small boutiques of Strasbourg. Visit the old town, its picturesque quarters and half-timbered houses in the neighbourhood known as "The Petite France". Visit the Gothic cathedral and its famous astronomical clock, and the European Parliament. Be sure to sate your appetite as well with the pastries, giant soft pretzels and fresh cheeses at every corner. Dinner tonight in one of our favourite restaurants.

Your first ride in Alsace is quite easy, as it follows a flat bike path the entire way, along the Canal of the Rhine to the Rhone. You leave Strasbourg passing by the buildings of the modern and impressive European Parliament on the banks of the Ill River. Take advantage of the many opportunities along the way to stop and detour into the typical Alsatian towns and villages for a coffee, or perhaps some thin-crust crispy - and at the same time melt in your mouth - tarte flambee for lunch. your ride brings you at the end of the bike path to the Medieval town of Saverne, nestled up against the vineyard hills. You'll want to take some time to explore this lovely town, with its pedestrian zone, half-timbered houses, and the Castle of Rohan perched above, before hopping on to one of the several local trains with your bike - you'll love the easy half hour train ride right back to the heart of Strasbourg!

Day 6 of your Alsace Biking Tour : Loop from Colmar into Germany 50 Km / 31 Miles

Today's ride is wonderful; a full day of very easygoing riding, through the small farming villages and forests to the east of Colmar. You will ride through the Vaubun-designed town of Neuf-Breisach (all of his fortified towns have been classified by UNESCO), with its typical protective walls and wheel-spoke design, before following a bike path over the Rhine River - au revoir to France, and hallo to Germany! You pass the old border crossing (before the European Union made them superfluous). Have some fun mixing up languages, while you explore the German medieval town of Breisach and get some lunch, before heading back over the river into France to finish your ride. The return ride is on another lovely bike path following a canal back into Colmar for a second night. Your final dinner is included this evening.

After a final delicious breakfast, there are easy connections out of Colmar train station for your continued travels. Bon Voyage!